More than 60 percent of Tampa Bay Water’s drinking water supply comes from groundwater wells located in and around Tampa Bay area wetlands. Wetlands are saturated lands filled with marshes, swamps, gators and birds, and their health is essential to our region’s water supply. Wetlands are particularly vulnerable to human activity and changes in land use, and therefore are carefully monitored and protected by federal, state and local laws.

The Tampa Bay regional water supply was once 100 percent groundwater. After decades of population growth, increased development and severe drought in the ‘70s, ‘80s and ‘90s, regional wetlands suffered harsh environmental impacts and the natural environment could not sustain the region’s water needs. It was clear to local and state leaders that the Tampa Bay region needed alternative water supplies. Following years of negotiations among legislators and local governments, Tampa Bay Water was formed in 1998 as, among other reasons, a solution to the environmental damage caused in part by the region’s over-reliance on groundwater.

An integral part in creating Tampa Bay Water was the Partnership Agreement with the Southwest Florida Water Management District (District) that provided up to $183 million in co-funding for the development of alternative drinking water sources. In exchange, Tampa Bay Water and its members reduced groundwater pumping with a phased approach that resulted in more than 100 million gallons per day in groundwater cutbacks between 1998 and 2007.

Groundwater from wellfields is still Tampa Bay Water’s main source of drinking water. Groundwater is pumped from the Floridan aquifer, layers of underground limestone that store billions of gallons of water, and blended with surface water and desalinated seawater.

Wetlands and the aquifer serve as a natural filtration system for rainfall and runoff. This makes wetlands a vital part of our environment and a critical part of our clean drinking water supply.  Tampa Bay Water uses wells throughout regional wellfields to produce millions of gallons of drinking water per day and help serve more than 2.5 million people. 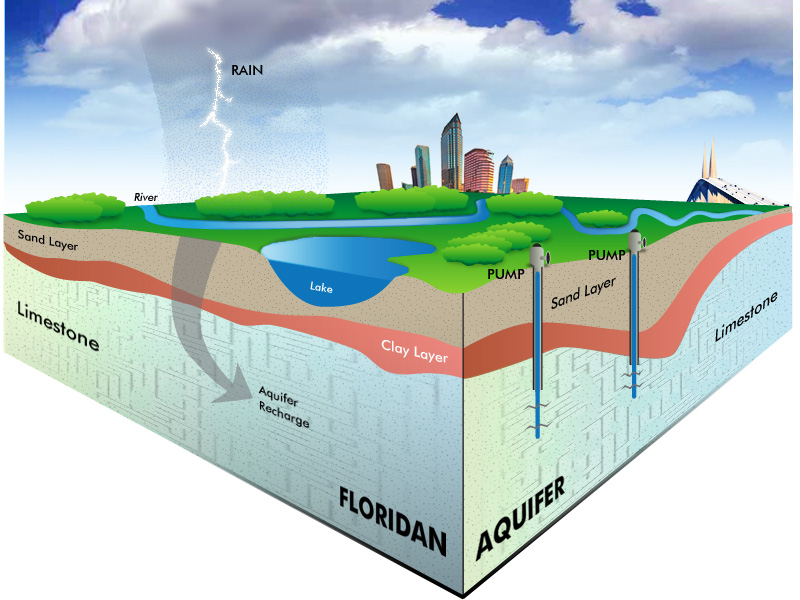